John Saunders reports: The guest of honour, Iranian arbiter Shohreh Bayat, was invited to toss a coin on behalf of the two captains at the starting ceremony. Daniel Abbas, as captain of the Oxford team which had won the previous year, had the privilege of calling heads or tails whilst the coin was in the air. It came down the wrong way for him and the Cambridge non-playing captain Gwilym Price duly chose White on the odd boards. This ultimately proved a most felicitous decision and, despite the Cambridge captain having no further part in proceedings until the time came for him to be presented with the Margaret Pugh Trophy, it can perhaps be said with hindsight that he made the most decisive move of the day.

The match programme listed Daniel Gallagher (Pembroke) as the Cambridge board six but he had had to withdraw through illness. Commiserations to Daniel for missing out. Into his place came the Cambridge reserve, Declan Shafi. The 19-year-old Scot thus became the 500th player to represent Cambridge in the match’s history (484 players have played for Oxford – we are thus a handful of matches away from reaching a round figure of 1,000 players who have had the honour to represent their university in this famous fixture). The change of line-up lowered the Light Blues‘ average rating to 126 Elo points per board, so they remained pre-match favourites to end the Dark Blues‘ run of three straight victories (the best run of form they have enjoyed since the 1990s). 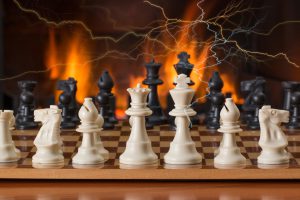