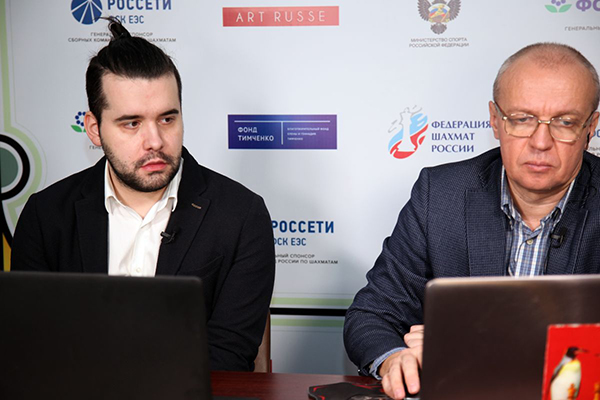 The Russian Championships Superfinals resumed in the Central Chess Club in Moscow after a free day.

Mikhail Antipov withdrew from the open tournament. According to the rules, the results of the games he played are valid. All his rivals will get technical wins after Round 7.

The seventh round, probably, saw the most critical game of the whole event. The Nepomniachtchi vs. Karjakin encounter lasted for a bit more than two hours. Nepomniachtchi played a new and quite unpleasant (for the Black) idea in the Nimzo Indian Defence with 4.f3. The central white pawn made it to d6, while Black’s position was rather cramped. It was not easy for Black to understand the opponent’s threats, and Karjakin didn’t find the most precise way to proceed in the middlegame. Not willing to defend passively, he decided to give two pieces for a rook and a pawn, but it didn’t help him. Black’s position was objectively lost after the queens‘ exchange, and Nepomniachtchi celebrated victory on the 32nd move.

Maksim Chigaev defeated Vladislav Artemiev with the white pieces. As he said afterwards, the game had been very strange.

Maksim Chigaev: „Vladislav opted for the Richter–Rauzer Variation of the Sicilian Defence, which he has never played before, and I also have seldom practiced it recently. A complicated play started at some point, and I think that he overestimated the position. He allowed me to play b3, c4, and Qh5 and to trade queens in a comfortable way. The pawns were fixed, black bishops were still out of play, and I managed to centralise my forces. Perhaps, he had drawish chances in the end, but he made the final blunder by 47…d5 38. cxd5 Bxd5 39. Re5, and I was in time to put my rook on the h-file. And now it looks like the end“.

The leader of the women’s tournament Polina Shuvalova made the first draw in her game against the youngest participant Leya Garifullina.

Aleksandra Goryachkina narrowed the gap from the leader by defeating Olga Girya. According to Goryachkina, she didn’t get anything from the opening.

Aleksandra Goryachkina: „Olga took a strange decision to sacrifice a pawn on a6. As it seemed to me, it was hard for her to play after it. However, an unclear play started at some point because I blundered 24…Nc5 after her exchange sacrifice. In the endgame, where I had a rook versus her knight and two pawns, it was harder for her to play, and she was shorter on time. That’s why I managed to win quite easily“.

Alina Kashlinskaya demonstrated a powerful attack with several sacrifices against Alisa Galliamova’s king and achieved a bright victory after the 41st move. Valentina Gunina recklessly sacrificed a piece to Alexandra Kosteniuk, but the 12th women’s world champion converted her edge in a tough struggle. Marina Guseva outplayed Yulia Grigorieva with the black pieces, while Natalija Pogonina defeated Tatyana Getman in a long fight. 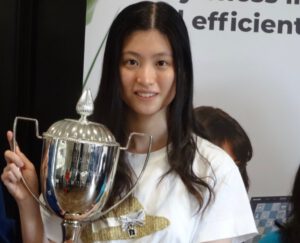 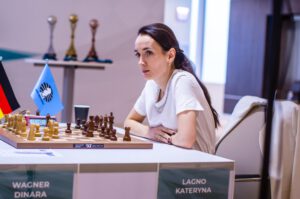 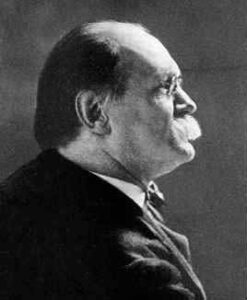