After five rounds of play, Russia’s Ian Nepomniachtchi emerged as a clear leader in the 8-player 2020 Candidates, having defeated Wang Hao of China. With 3.5/5, he is half a point ahead of second-placed Maxime Vachier-Lagrave who drew with Russian wild-card Kirill Alekseenko. On other boards, American Fabiano Caruana was lucky to escape with a draw against Anish Giri, while the game between Grischuk and Ding Liren finished last with the two splitting a point after a long battle.

After a day of draws (Round 4) came a day of sharp lines and edgy play at the 2020 Candidates. Finally, one player managed to rise above the rest – Ian Nepomniachtchi, as he defeated Wang Hao of China. This was a battle between two leaders (Nepomniachtchi, Wang Hao and Vachier-Lagrave were tied for the first place after four rounds). Before this game, the two met four times and the score was even: one win each and two draws. The last time they faced each other in a game with classical time control was at the Danzhou super tournament in 2016. That encounter ended in a draw. Not this time, however!

After 1.e4 Wang Hao opted for the Petrov Defence as Black. White quickly started pushing his h-pawn towards the black king’s fortress. The move is considered a novelty and became a cause for Black to go into deep calculations. Commentators – including world champion Magnus Carlsen – noted that pushing the h-pawn has become more common at the top level as a clear sign of how AlphaZero (the powerful chess computer, which patented the idea behind the move) was influencing the game.

Both players demonstrated a high level of preparation and the position was mostly balanced. Although Ian was persistently looking for opportunities, a draw remained the most likely outcome.  However, Wang Hao first allowed Ian’s queen to infiltrate into his camp and then committed a fatal error with 32…Qd7? (a bold 32…Nxd4 with the idea of launching a counterattack on the light squares was sufficient for a draw). Nepomniachtchi was quick to capitalize on the opponent’s misstep and after a forced sequence Black had to give up a piece and resigned immediately. 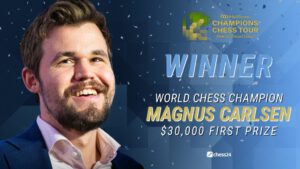 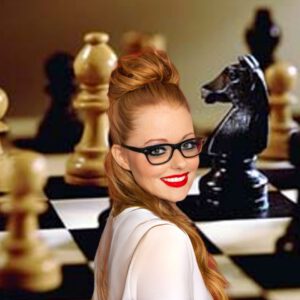