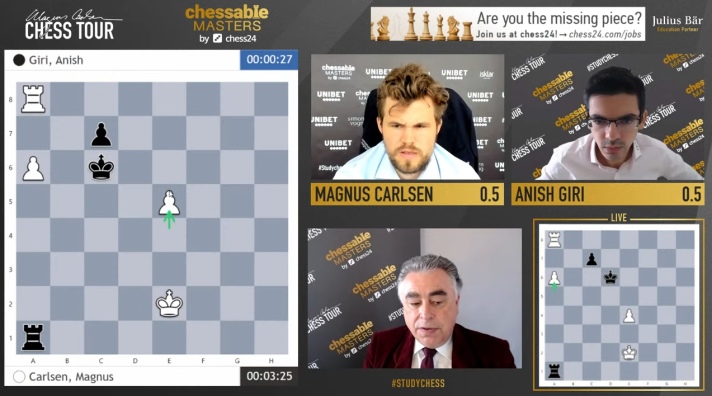 A huge online audience saw Magnus Carlsen take the lead against arch-rival Anish Giri in the $150,000 Chessable Masters final today. A peak of at least 50,000 on chess24.com channels alone tuned in to watch the Magnus Carlsen Chess Tour event as it was broadcast in 10 languages.

Carlsen said: “It was 3.5 games that were pretty solid and then… insanity ensued.”

Carlsen started like a train and steamed into his in-form rival early in the first game of the four-game set. But Giri, who won the MrDodgy Invitational in the run-up to this event, managed to pull off a remarkable save.
The Dutchman, who upped the ante by tweeting about Carlsen in the break, could not escape in the second, however. The game had looked like it was heading for another draw but Carlsen left the commentators shocked with a sudden win in the endgame.