Shakhriyar Mamedyarov stuns Maxime Vachier-Lagrave with a powerful game at the FIDE Grand Prix organized by World Chess in Riga.

The French finds himself in a critical must-win situation for the second final game on Tuesday.

The FIDE Grand Prix is back to the stage of the National Library in Riga after a break on the weekend. Both finalists had granted themselves an additional free day on Saturday by winning their respective semi-final matches without the need of a tie-break. Maxime Vachier-Lagrave and Shakhriyar Mamedyarov deservedly earned their place in the final. The French qualified in all his matches in convincing manner without ever needing a tie-break. The Azeri won two matches in the classical games and only needed to go to extra time in the second round.

Mamedyarov’s first move 1.d4 was made symbolically by Andis Šteinmanis, General Manager at Kaspersky in Baltic. The cybersecurity company has been a partner of World Chess and the Grand Prix Series since 2017. Mr. Šteinmanis stayed for a long time after the start to follow the action and was keen on listening to the commentary of experts on site. As expected, the game started with Vachier-Lagrave’s favourite Grunfeld opening. Mamedyarov followed the same strategy as in his semi-final game against Wesley So, when he introduced a small but poisonous novelty. He revealed afterwards that the idea 12.Bf4 had been worked out by one of his helpers. The French soon reacted badly, when he played the natural 13…Nc6 instead of 13…e6 or even the bold capture of the pawn on d4. Things went from bad to worse after 14.d5 when Vachier-Lagrave chose 14…Na5 instead of the centralizing move Nd4. He had failed to spot the strong intermediate 19.exf6, which left his position in ruin. Mamedyarov had no trouble increasing his advantage and forced resignation on move 28. The French will have to collect himself and draw all the possible energy if he intends to bounce back in the second game.

Sunday was the official free day of the FIDE Grand Prix. Some side events were organized in the touristic seaside resort Yurmala. Grand Masters Igor Kovalenko and Yannick Pelletier played friendly games against passer-by, and several official members of the Latvian and of the International Chess Federations joined in the fun. Later in the afternoon, an exhibition match was organized at the WTA Baltic Open. The President of the Latvian Chess Federation paired up with national star Jelena Ostapenko, who had won Roland-Garros in 2017. They overcame their opponents Bozic-Krums 6-3 in a highly entertaining match. 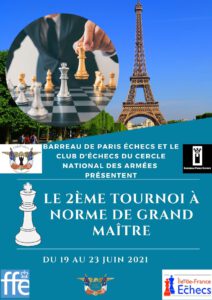 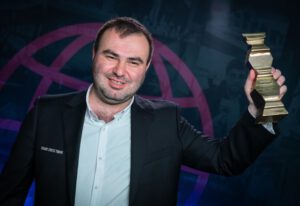 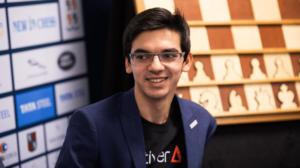 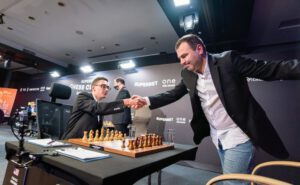 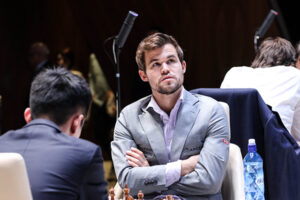 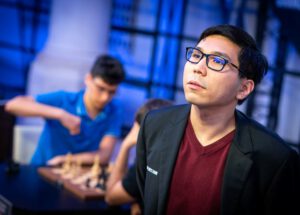